I love Joni Mitchell. I was a little late to her party with 1988’s release of Chalk Mark In A Rain Storm, but it didn’t matter so long as I got there. It’s a desert island disc for me. You wouldn’t think so given her early monumental works like Blue (1971), Hejira (1976), and Court and Spark (1974), which is a very close second to Chalk Mark on my list followed by Night Ride Home (1991), but it is my standout Joni Mitchell record start to finish. I loved her mid-career sound that really hit its stride on this recording. She had embraced burgeoning digital audio and used it to perfection as only she could. Plus, Chalk Mark is loaded with so many of my favorite players there’s just no way I wouldn’t fall in love. And the funny thing is, this record may have never crossed my path if we hadn’t been on tour for our self-titled release the same year it was released. CD’s were coming on hot and heavy in 1988. It was big news when you could buy a new release for only $18. (Highway robbery? You bet!) One of our stops on tour was a disc manufacturer and distributor plant. I don’t remember which one it was, or even where it was, but I remember they set us loose in the warehouse and said, “Pick out anything you’d like.” Talk about a kid in a candy store: rows and rows of floor to ceiling shelves filled with music. Both Kiya and I walked out with over-stuffed bags (plural) of discs and cassettes, the latter were still the medium of choice for most people back then. In fact, now that I think about it, my introduction to this record was actually a cassette. In any case, I remember seeing it on the shelf. I don’t know what drew me to it, but I knew I needed to hear it. It always pays to follow that sort of intuition. I was transported out of the van, out of my body, and into a place that only exquisite music can take me from the very first note I heard. Even now, I listen to it and I go somewhere else. I can only describe it as a place of pure calm. Those songs are emblazoned into my brain and they resurface at the oddest times. Take this photo from Craggy Gardens, for instance. I hear Joni singing My Secret Place (lyrics below) with Peter Gabriel. You can hear it here. I hope you enjoy it!

My Secret Place, by Joni Mitchell

“Trust your hunches. They’re usually based on facts filed away just below the conscious level.”...

“You can practice thinking, but the answer you get by thinking is not the only... 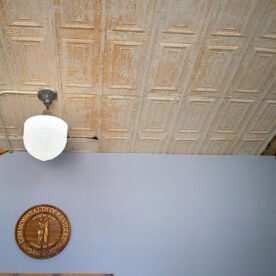