Anthony and the Git ‘Er Done boys returned today to take down the rotten tree out front (below). Folks who’ve followed me on facebook over the years have heard me talk – curse is more like it – about a neighbor I’ve nicknamed “Chainsaw Charlie” due to his incessant need to cut firewood in his driveway with a bloody chainsaw at all hours of the day and night. Thus, it came as no surprise when I came home at lunch today to find him mingling with the guys, particularly keen to talk to the cool dude with the chainsaw (I’ve learned his name is Chris Davidson, by the way). I was silently hoping Chris wasn’t giving him pointers or telling him where to buy such a big chainsaw. That’s all I need. Bigger logs that take longer to cut even with a big chainsaw. I want to like the guy, I really do, but he needs to go live in the country where he can saw trees till he’s blue and let every wild thing in the country grow up his fence like he’s letting grow up mine. Clearly, after twelve years of this, I am no closer to seeing that day. So, instead, I will tend to my piece of heaven and prepare to plant twice as many trees I am I taking down. That’s what I did when I moved in. I took down three trees and planted eleven. I don’t think I’ll plant eleven this time, but I will certainly replenish Mother Nature’s bounty with something I can manage into my old age.

“The game is to be where you are. Be it as honestly and consciously as...

“One of the secrets of life is to make stepping stones out of stumbling blocks.”... 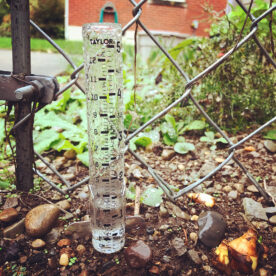 “I am always doing that which I cannot do yet in order to learn how...