We managed to salvage a bit of our soggy Christmas vacation by coming home from the Smokies by way of Cade’s Cove. What remains of this pioneer community now resides in the care or the U.S. Forest Service as part of the Great Smokey Mountains National Forest.

Cade’s Cove was settled in the early 1800’s and eventually grew to 700 before it dwindled. Relatives of those first settlers (kept alive their first winter thanks to the compassion of local Cherokee) remained in the Cove in 1934 when it became part of the National Park system. There’s a driving loop through the cove; one way for all eleven miles of it. There are plenty of pull-overs so that traffic remains in motion. You can always tell when someone has seen something because the flow just stops cold. I guess all those city slickers have never seen deer or turkey or bears, and they either get out of the car (stupid idea) or they want their iPhone photos to be a little less blurry so they stop. I just up my shutter speed, roll down the window, and keep driving. All of these shots were taken from a moving car. The deer (and the turkeys we saw) didn’t seem to care either way, and that gives a false impression of domesticity which can be problematic for city slickers and bears. In any case, stay in the car and shoot the animals (only with cameras, of course).

One of the most amazing things yesterday – in addition to there being no barbs on the wire fences – was the unmistakable sound of croaking frogs. That’s right; two days after Christmas it was so warm that frogs rang out through the valley. It was a whopping seventy-eight degrees. The humidity was rising, and rain clouds began to form. We were really, really fortunate. We managed to miss the rain, and we got to spend some real quality time with each other, windows down, hair blowing in the wind, listening to frogs, marveling at the beauty. Not what you expect this time of year, but it made a really special day for me and my folks even more memorable. 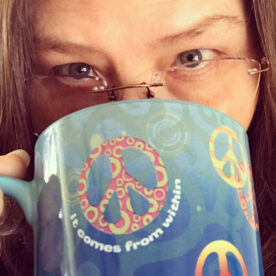 “The only way to make sense out of change is to plunge into it, move...

“We are here to love and encourage each other in the unfolding story. And to...

“The very least you can do in your life is figure out what you hope...

“You must learn a new way to think before you can master a new way...

“Fear is the cheapest room in the house. I’d like to see you in better...