I saw David Hurst Saturday. He showed me a recent vinyl discovery he’d made. I took a little trip down memory lane with his find; a signed promotional copy of our first LP. It was signed by the most experienced lineup of the band; Kiya, Jon Durno, Gregg Fulkerson, and yours truly. We did a lot of touring after the album’s release in May 1988. Our first guitarist during the southern and part of the east coast tours was Brian Bonham. Gregg came aboard sometime during that east coast tour (I think) and through the Midwest and west coast tours which would have probably been July through December of ’88. It would be really interesting to know the life of David’s album because the lives we four shared during our time together was some of the best times I had in music. We were a really good combo that didn’t really get to finish what we started. Unfinished or not, I wouldn’t trade my life with them for anything.

“We are cups, constantly and quietly being filled. The trick is, knowing how to tip...

“Don’t look back. You’re not going that way.” ~ Unknown Funerals are such sad occasions,...

“To be kind is more important than to be right. Many times, what people need... 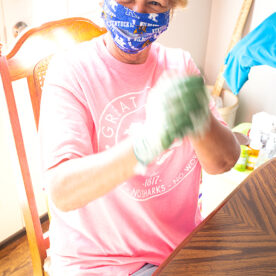 “You don’t have a right to the cards you believe you should have been dealt....

“The world always looks brighter behind a smile.” ~ Unknown I was in West Liberty...

“Kindness is the language which the deaf can hear and the blind can see.” ~...