They were living in rural Anderson County when Marcie told me about Annie. If memory serves, a torrential downpour had spooked the dog and she was missing. She was gone so long she was feared dead. And then, as country dogs do sometimes even after long periods of time, she miraculously reappeared.

When Marcie sold her house to move to Lexington there was some concern about Annie’s transition, being a country dog and all. Between Ann and Marcie, they helped Annie get her footing. Annie is a precious being. Not particularly fond of the camera, but willing because she came to greet me as soon as I walked in. She said okay to my lens, and that’s a gift from human and animal alike. She is as perfect as Marcie said, and just as kind as Marcie. 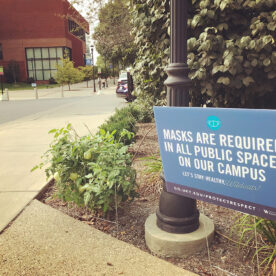 “Live as if your prayers are to be answered.” ~ Unknown Notice anything unusual about...

“You are the sum total of everything you’ve ever seen, heard, eaten, smelled, been told,...

“Happiness is not the absence of problems, it’s the ability to deal with them.” ~...