“Almost everything will work again if you just unplug it for a few minutes… including you.”
~ Anne Lamott

Like I said, Sir Paul played for three hours last night. By the time I got back to the hotel and looked through the pictures, I was exhausted; too exhausted to say much more than I did. Today, I had a six hour drive to reflect on last night’s performance. It was great while it was happening, and it’s even better the next day.

When Paul McCartney walked onto that stage it was/is hard to believe he’s 75 years old. The monitor would sometimes zero in on his hands, particularly as he played his acoustic, and there was something striking about them. He has the hands of a 30 year old. I’m not exaggerating. In fact, everything about him is as brilliant as if he was still that young man in the Beatles. His voice and droop of the jowls are the only evidence that he has aged at all. That he can sing at all at 75 is pretty remarkable, but he sang really well. The missed high notes here and there (what do you expect at 75?) were greatly overshadowed by the incredible dexterity, range, and command that remains. Between his flawless band, and an audience that knew all the words, those little misfires were hardly noticeable. His musicianship is nothing short of astonishing, and unless he has a stroke or something horrible like that, I guarantee he’ll still play as good as he did last night for another 20 years. Again, I’m not exaggerating. It’s going to be hard for him to sing, but his playing won’t be stopped. He’s that good.

He played many more Beatles tunes than I expected; a brilliant surprise. Each song a stellar performance, from solid rockers Back in the USSR and Hard Day’s Night to the stirring Hey Jude and Blackbird, there was something for everyone. He played plenty of Wings tunes, and of course his solo material. He paid tribute to both John and George in song. He played the first recording by The Quarrymen (In Spite of All the Danger) then skipped to his most recent song, which based on the images projected I can only assume was the song he cut with Kanye West and Rhihanna. It was the only song he played that I didn’t recognize.

Sir Paul missed the intro to Hard Day’s Night, the opener, because, after he counted it off, he turned to the mic to sing, but found himself 3-5 feet away from it. If you know the song at all, then you know immediately after the booming strong opening chord you have to hit the vocals or it won’t work. So he stopped the song, had a laugh, and they started again. At that moment I knew it was going to be an extraordinary night, but it exceeded my expectations even still. Three or four songs later, as the drummer and keyboardist were out of sync starting Temporary Secretary, Paul stopped them again. He said,”At least you know we’re really live. No tapes here!” He is a brilliant showman in addition to everything else.

Sir Paul’s band loves him. You can see it on their faces from the second they step onto the stage until the last bow. They’re all gifted players with a wide range of talents. He moved them closer to the stage’s edge during the middle of the show for a more intimate feel, and it did feel more intimate because we weren’t in a stadium, but in a nice outdoor amphitheater with the most incredible sound I have ever heard at a live show. EVER! There wasn’t any instrument you couldn’t distinguish from the others. We were close enough to feel the kick drum in our bellys, but it didn’t thump our ears. The screaming guitars didn’t hurt. And the pyrotechnics during Live and Let Die? It was one of the most righteous things I’ve ever seen, and rather than photograph it, I just stood in awe and screamed my head off (yes, I’m hoarse today). It was already a favorite, but this spectacle put it over the top. I’ll just say that we were close enough to feel the intense heat from the blasts, and it was one of the coolest things I’ve ever experienced. I would go see Sir Paul again for that song alone.

You can tell Sir Paul is a gentleman. He introduced the song Valentine that he wrote for his current wife Nancy, who was in the audience, then he introduced Maybe I’m Amazed that he wrote for Linda. Between those cuts, Yesterday, and Let it Be, I’m pretty sure everybody had a good cry, even the men (maybe especially the men). He picked out a few people from the audience who had been holding up signs and brought them onstage. They included two young boys that wanted to play with him. He didn’t let them play instruments, but he did have them (and their parents) help sing Get Back. Their mom stole the show, so I’m thinking the boys are headed back to the woodshed for a few more hours of practice. But here’s this legend giving these boys a chance of a lifetime that ended with, “wait, let’s have a group hug,” before they left the stage. He’s a stand-up guy just as I expected.

“Trust in dreams, for in them is hidden the gate to eternity.” ~ Khalil Gibran...

“Even if you’re on the right track, you’ll get run over if you just sit...

“The days I keep my gratitude higher than my expectations, I have really good days.”...

“Live your life and forget your age.” ~ Unknown More than once I’ve passed Laura...

A Winter Solstice Blessing ~ Molly Remer May you have a warm heart, open hands,... 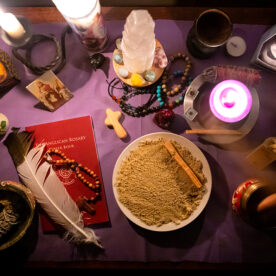 “Grow through what you go through.” ~ Unknown For Christians it is the season of...