“The Bible says ‘a gentle answer turns away wrath, but a harsh word sours up anger.’…Righteousness is complicated. Self-righteousness is the root of all evil. Let’s start with ourselves.” ~ Meg Barnhouse

When I first met Jack he had two eyes. He then disappeared for many weeks. When he reappeared he had only one eye. He kept sticking around the duplex that Stacy and I shared on Fontaine. When winter set in, we let him inside, though he was always free to roam. He rarely wandered far, and he was always home by dinner time, a bit like a child. Eventually, we learned that he belonged to the family in the duplex next to us; that he’d contracted an eye infection, and rather than treat him with meds, they chose to remove his eye. I wouldn’t have gone home either if I’d been treated like that! By spring, his family had moved, leaving him behind. I adored Jack, and I wasn’t about to have him abandoned a second time. So, when I bought my house I brought him with me. He and Sadie got along great, and when Lilly showed up on my porch late one night, he welcomed her in. She, being a feisty kitten, slapped Jack’s jaws more than once, but he never retaliated (frankly, I’m not sure he saw it coming, what with only one eye). That was my one eyed Jack. The most gentle animal I’ve ever known. We hadn’t lived here long before he was diagnosed with cancer. I brought him home for what was only to be a short time, but his disease had progressed much further than the vet and I realized. It was a cold February night. At supper time he gasped, gurgled, and that was it. It was over just that fast. I called Stacy to come hold the flashlight as I buried him beneath my beautiful fir tree. A few weeks later my friend Jill LeMaster gave me this handmade marker. It was a most thoughtful gesture. Now, I say hi to Jack every time I’m outside, and it’s been nice to watch how time has treated his stone; now a natural part of the yard. I’m so lucky he picked me. 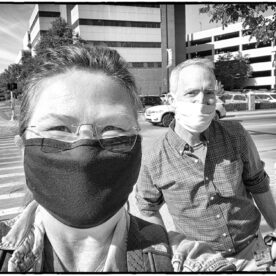 “Some people are going to reject you simply because you shine too bright for them....

“Everyone you meet has something to teach you.” ~ Unknown At last, the dogwoods of... 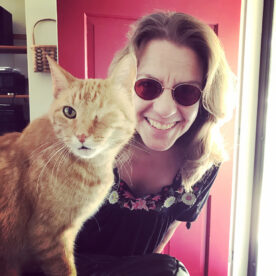 The way people treat you is a statement of who they are as a human...

“You gain strength, courage, and confidence by every experience in which you really stop to...