“Learn to respond as if this is the first, and very last day of your life.”
~ Bro. David Steindl-Rast

I was struck by the close proximity of four churches to the Jenkins public library. With a good arm you could throw a rock and hit all four churches; the Methodist Church, the Baptist Church, the Christian Church, and St. George’s Catholic Church (above and below). The latter two really stood out for me. They were precariously perched on the hillside overlooking the narrow valley of Jenkins. Saint George Catholic Church was particularly interesting to me. With little space for the building, they used nature for what they needed. Behind the church is a small parking lot. At the far end of the lot, the stations of the cross follow a footpath to Christ on the cross, which shows better in the photo below. Opposite the church, a set of stairs lead to the second of two grottos. Unlike the one visible in the photo below, this grotto features vinyl bench seats from a van or bus arranged in an open-air semicircle. Saint George is a sacred space paradise left unexplored only because it was so frigidly cold the day I was there. I’m definitely going back.

Getting to Saint George’s parking lot you make a sharp left turn past the Christian Church (below). No doubt it was designed before ADA compliance, and I suspect, like so many other similar Eastern Kentucky churches, it has been retrofitted with something to help the aged and infirmed reach the second-story sanctuary. I should point out that the two churches opposite Saint George and the Christian Church – the Methodist and Baptist churches – are both made of brick, and they appear to be substantially larger in square footage. Nevertheless, the modest Catholic and Christian Churches stand over Jenkins with as much dignity and charisma as any other church. I’ll be going back when it’s warmer.

“Surround yourself with people who talk about visions and ideas, not other people.” ~ Unknown...

“Happiness, true happiness, is an inner quality. It is a state of mind. If your... 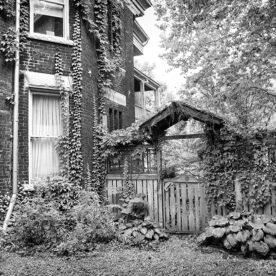 “Isn’t it funny how day by day nothing changes, but when wee look back everything...