“What you leave behind is not what is engraved in stone monuments,
but what is woven into the lives of others.” ~ Pericles

Seems like every family was affected by the Vietnam war. Either they lost a friend and/or family member in body, or in spirit. My family was no different. Dad’s younger brother, Ralph Paul, was killed by gunfire in the Phouc Long Province along with seven other men on January 9, 1969. It was the day after my 4th birthday. He was 21 years old, a newlywed, and started his first tour of duty just a month earlier on December 7, 1968. He was a great guy whom the family and his best friend, Tony Adkins, still mourn. I give thanks for having known him (and remembering him fondly), for his service and sacrifice, and for the millions of men and women who serve and continue to serve, including both of my parents.

“The beginning is always today.” ~ Mary Wollstonecraft Shelley     I had to share...

“Sometimes what you’re looking for comes when you’re not looking at all.” ~ Unknown  ...

“A long habit of not thinking a thing WRONG, gives it a superficial appearance of... 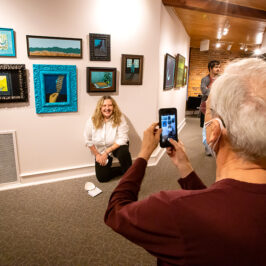 “Surround yourself with people that reflect who you want to be and how you want...