“I feel the capacity to care is the thing which gives life its deepest significance.” ~ Pablo Casals

I remember staring at my dad’s tattoo when I was little. I’d curl up in his lap and stare at it for the longest time, and run my finger over it, and wonder about it. It showed more detailed back then than now. Tattoos were rare in the 1960’s. I always knew he was a warrior, and his tattoo was the only outward sign of his past. Otherwise, he didn’t talk much about his experiences. In his hospital bed last night I saw his tattoo, and naturally grabbed my camera. I asked, “Dad, where’d you get that tattoo?” I had never asked before. “Fayetteville, North Carolina!” he said with gusto. “What did it cost you?” I asked. “Ten dollars,” he replied proudly. “Some other boys were spending $20, $30, $40 dollars on their tattoos, but I didn’t want that. I liked my $10 tattoo. It was simple,” he giggled. “That other stuff was just a waste of money.” Fayetteville is near Fort Bragg, home of Airborne and Special Forces operations. He trained there for quite some time. He talks about Fort Bragg often. One story he likes to tell was the time he hitch hiked home to Kentucky from Fort Bragg. His youngest brother, James, was just a baby. It was the middle of the night when he arrived, so he sneaked into the house and went to sleep on the couch. A few hours later he woke up with James staring at him. Without moving a muscle Dad said, “What are you doing, boy?” It scared James so bad he went screaming for Mamaw. That was the first time the two brothers met. I love his stories, and I love his tattoo. He earned those wings.

“The less you respond to negative people, the more peaceful your life will become.” ~...

“If at first you don’t succeed, adjust your crown and try again.” ~ Unknown Right...

“Each day brings its own gifts. Untie the ribbons.” ~ Ruth Ann Schabacker “I saw it... 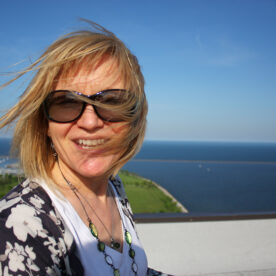 “Even bad days are valuable.” ~ Shinsuke Hosokawa I’ve mentioned before that gals over 50...

“When you arise in the morning, think of what a precious privilege it is to...

“Passion doesn’t come from business or books or even a connection with another person. It...