This is one side of the battlefield at Perryville, Kentucky where over 2,000 men from both Confederate and Union troops were killed. In fact, some of the dead were buried where they fell and many of those graves remain unidentified. The park was holding a commemoration event of the battle today, though it did not include a reenactment. If it did, you know I would have been there, camera in hand. The battle started on October 7, 1862 and ended late the following day. 156 years ago tonight men were positioning themselves to kill one another. That life, that war, is hard to imagine. So many things have changed since then. I’m watching a football game (a game that didn’t exist in 1862) on a television (really didn’t exist) that’s so dang wide and thin it takes up a whole wall (unfathomable). Yet more and more I marvel at how little our society has changed. As a nation we continue to struggle ideologically, to find and hold common ground, and that’s never been more apparent to me than over the last two years. Thankfully, I know a lot of really good, smart, compassionate young people and it’s because of them, and the belief that goodness, mercy, and love will ultimately triumph over evil, that I keep the faith that one day no person of color has to be afraid, no woman has to stay silent, no poor person has to die because they can’t afford medicine, people can love who they want, and the American system of government has been further refined to abolish an archaic electoral college and all the loop holes that allow mentally challenged, corrupt people to hold office have been closed tight as a drum. These things would form that more perfect union we always talk about but have yet to realize. I’m sure 156 years ago people thought we’d have this all sorted out by now. Shoot, when I was born people thought we’d be the Jetson’s driving to work in tiny spaceships by 2000! I am reminded that indelible progress is a mighty long road. I am surrounded by truly great friends and family who help me stay positive in a negative world. Well, them and Wally. Wally makes everything better. Dog is God spelled backwards after all. 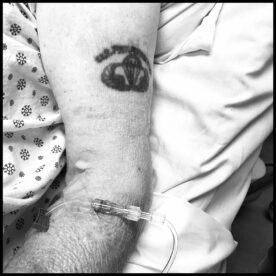 “I can’t change the direction of the wind, but I can adjust my sails to...

“Your beliefs will be the light by which you see, but they will not be...

“Life is constantly in balance ~ it takes only a moment to tip one direction...

“Courage doesn’t mean you’re unafraid, it means you rise above your fear.” ~ Unknown  ...