“Live in such a way that if someone spoke badly of you, no one would believe it.”
~ Unknown

I grew up with artist Ron Gevedon. Against all odds he has remained as steadfast and driven to making art as anyone I’ve ever met. His work is thought-provoking, rooted in history, and steeped in Appalachian spirit. One of my favorite works is his Cannel City Coal Babies ceramic rattle. He dug the clay himself from a nearby holler. Coal Baby was a derogatory term for Cannel City children known to play in the coal dust. You see, at the turn of the 20th Century, Cannel City was one of the largest cities in Kentucky known world wide for its hot, long burning cannel coal. Few remember the city’s significance, but Ronnie works tirelessly to find and preserve as much of its history as possible. He also helped organize today’s art and music event at DeLancey Park in Cannel City. It was the first such gathering there in 105 years. Apparently, the last time such a thing happened it involved a circus tent, moonshine, and knives (the circus never came back, I’m told).

In any case, I had a blast today! I got to visit with people I don’t see often. My BFF cousin Pam Oldfield Meade invited me to show a few of my photos in her booth. I got a few compliments, which is always nice. I saw my old art teacher/band mate Larry Adams, and my 4th grade teacher Wanda Reed who actually remembered me. I spoke with a man I had a serious crush on 30 years ago. That was interesting. I met some remarkable artists. I even met a young man who is my fourth cousin as we recently discovered via DNA tests on Ancestry.com. I’m telling you, it was a great day!

This is Bonita Skaggs-Parsons, an artist after my heart. Her creations are made from newspapers. They’re incredibly creative, whimsical and fun. You can’t help but smile when you look at them. Her mother is a quilter, and her daughter is a poet. We had the best conversation, and she very kindly gave me one of her small hats, and her daughter’s chapbook of poetry. I was really touched by such generosity. What a blessing to be in the company of such giving, creative spirits. Did I mention what a wonderful day this was? 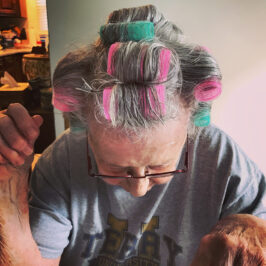 “My advice to you is not to inquire why or whither, but just enjoy your...

“Kindness can become its own motive. We are made kind by being kind.” ~ Eric...

“life can turn on a dime life can change in a moment, sometimes you have...

“You can’t give your life more time, so give the time you have more life.”...