“A mind that is stretched by a new experience can never go back to its old dimensions.” ~ Oliver Wendell Holmes, Jr.

Apollo Pizza in Richmond is a groovy little pizza and beer joint that also happens to have a big brain. Their Pages and Pints gatherings feature a variety of local and regional authors who read from their works while patrons enjoy pizza on handmade crust, or cauliflower crust if you need to go gluten-free, or in my case, you’re on a diet. A bunch of us Happiness Gals met last night to hear readings from Ronni Lundy, author of the James Beard Foundation Award winning Victuals, and my old friend Robert Gipe whom you met back in March 2015 signing his first book Trampoline. Here’s a great little video of Robert talking about Trampoline and how he came to create it. You ought to watch it. Last night he read from the second of his trilogy released last month called Weedeater.

In virtually every writing class I’ve had the subject of writing an accent, specifically a mountain or southern dialect, always comes up, and without fail everyone says the same thing: don’t do it because it inevitably reads like a bad face job looks. It’s extremely rare to find a writer who can make it work. But there’s one writer who can and it’s Robert Gipe. His books are transformative in several ways, not the least of which is his ability to stay true to the regional vernacular without losing his reader or making the characters sound devoid of intellect. Plus, if you ever have the chance to hear him read his work, take it. You will be changed. And ask him to read his ghost sex scene (tell him I told you to ask). His brilliant words will make you howl with laughter, raise an eyebrow, and most importantly, think hard about the lives and circumstances of his characters. He just gets better all the time. I’m real proud of him.

Then there’s Ronni Lundy. She’s sweet as the day is long. I heard her read for the first time last night, and what a delight she was. Though Victuals is touted as a cookbook, it’s far from your run-of-the-mill Betty Crocker tome. The description reads; “Victuals is an exploration of the foodways, people, and places of Appalachia. It explores the surprisingly diverse history–and vibrant present–of food in the Mountain South through recipes, stories, traditions, and innovations.” Ronni’s insights into how food is a gateway into the larger Appalachian culture is as thought provoking as any prose out there. I’m a fan for sure. Remember I said last night was awesome? Robert and Ronni are just two reasons why.

“Too often we underestimate the power of a touch, a smile, a kind word, a...

“You can practice thinking, but the answer you get by thinking is not the only...

“Don’t confuse your path with your destination. Just because it’s stormy now doesn’t mean you... 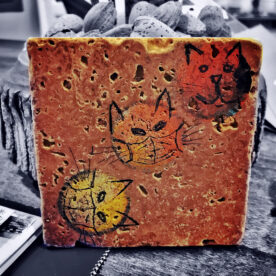 “The reason life works at all is because not everyone in your tribe is nuts...