“You do not have to be good. / You do not have to walk on your knees / for a hundred miles through the desert, repenting. / You only have to let the soft animal of your body / love what it loves. / Tell me about despair, yours, and I will tell you mine. / Meanwhile the world goes on. / Meanwhile the sun and the clear pebbles of the rain / are moving across the landscapes, / over the prairies and the deep trees, / the mountains and the rivers. / Meanwhile the wild geese, high in the clean blue air, / are heading home again. / Whoever you are, no matter how lonely, / the world offers itself to your imagination, / calls to you like the wild geese, harsh and exciting— / over and over announcing your place / in the family of things.” ~ “Wild Geese” by poet Mary Oliver

Some days are just better than others, and today, I got one. From start to finish it’s been awesome, and one of the reasons is because I got a hand written letter from my cousin Eunice Ambrose. You met Eunice (above right) and our other cousin Drucilla (left) back in 2015 at the Terry Family reunion. Then, in June of this year, when dad and I had our daddy/daughter day, we stopped to see Eunice and her husband Johnny. Eunice saw the many posts I did after that trip, and it turns out that I got a lot of information wrong (I never could trust dad to tell me who was who). So, in her sweet letter Eunice told me the truth. Dad got Eunice’s mother, Elva Jane, mixed up with Drucilla’s mother, Sylvania. He probably confused them because they were twins. At the Ary cemetery for my July 3 post, I thought we were at Eunice’s parent’s graves, but it was Drucilla’s – Sylvania Terry and Silas Grigsby. Eunice’s mom, Elva Jane, was married to Wise Arnett (isn’t that a great name, Wise?). But I got more wrong than just names. I thought the old company house was Uncle Rufus’ because Papaw Terry took me there to see him back in the early 1990’s. (I have a picture of them on the front porch) The house belongs to Eunice. Rufus stayed with Eunice and her mother in that house for some time even before Eunice married Johnny. They, of course, moved out, and Rufus continued to stay in the house even after Elva Jane died in 1977. He eventually bought a house on Main Street in 1994 (and that explains why dad insisted all day that Rufus’ house was on Main Street), and lived there until he died in 2004. Now, see, I would have never known any of this if I hadn’t gotten it all wrong to start with! Not that I make it a habit to be wrong, I don’t, but it just shows the power of talking to one another, of being close with your relatives, and learning who your ancestors really are. I’ve had a lot of conversations lately about truth, and how we retell a shared event in completely different ways because we experience that event from our unique perspectives. The real truth, such as it is, only begins to show itself when everybody’s story is heard. I’m so very, very, very lucky to have relationships with my family and that they’re still on this planet to talk to me and teach me about who I am. I’m going to write Eunice back right now and tell her how much I love her.

“The arts are a very human way of making life more bearable. Practicing an art,...

“Action without love is meaningless, and love without action is irrelevant.” ~ Hafsat Abiola  ...

“Life is grace. Sleep is forgiveness. The night absolves. Darkness wipes the slate clean, not...

“I truly believe that everything that we do and everyone that we meet is put... 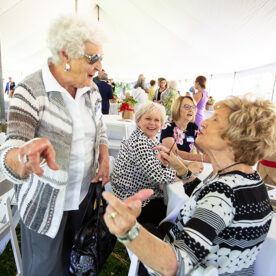 “Every dead body on Mount Everest was once a very determined individual. So… maybe calm...