“The questioner asked, ‘How do we treat others?’ There are no others.” ~ Ramana Maharshi

During what I call ‘Daddy-Daughter Day’, Dad and I went to Hardburly where he was born. We stopped in to visit with his first cousin, Eunice, and her husband Johnny Ambrose who live there at the mouth of Muddy Hollow. They live in a small house next door to Uncle Rufus. He was a brother to Papaw Terry and Eunice’s mom, Sylvania (married to Silas Grigsby). Rufus has been dead many years now. I first went to Hardburly with Papaw in 1989 or so, and I have a picture of Papaw and Rufus sitting on his front porch from that day.

I’d never been inside Johnny and Eunice’s house before this visit. In fact, I don’t remember the house being there when I was with Papaw back in ’89. It was a real treat to go inside. One of the first things Eunice showed me was a picture of her sister Drucilla, herself, and me from the family reunion year before last. She keeps it in the lamp shade next to her spot on the couch. It had cursive writing all over the back chock full of details about the event and the people. It reminded me so much of Mamaw Adams. Pictures covered every inch of her walls and little handwritten notes were stuck in every nook and cranny of the house. Eunice’s house was similar. I found it very comforting. And she called me “Little Kopanie.” It doesn’t get much sweeter, or more familiar, than that.

I learned something about Johnny I didn’t know before this visit, too. He’s a preacher. He preaches mostly at the church in Tribbey, the little spot in the road between Bulan and Hardburly. I also learned that he and Eunice lived on the second floor of Rufus’ house next door when they were first married. I also learned that Johnny is 66 years old. Dad is 77, and boy was he hamming it up when I tried to get the three of them to smile for the camera! If all we had done that day was visit with Eunice and Johnny, it would have been a great day. They are salt-of-the-Earth people and I’m proud to call them family.

“A bit of fragrance always clings to the hand that gives roses.” ~ Chinese proverb  ...

“Don’t be fooled by the calendar. There are only as many days in the year... 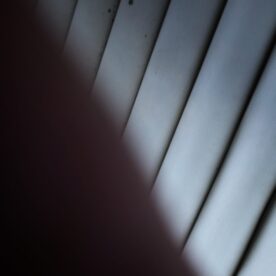 “The whole world is short staffed. Be kind to those that showed up.” ~ Unknown...

“When you start seeing your worth, you’ll find it harder to be around people who...