“Do what is right for you. No one else is walking in your shoes.” ~ Unknown

Yesterday I mentioned that Stacy Yelton and I took a trip to Old Fort Harrod. The hill where the fort currently sits is literally a stones throw from the original location. They couldn’t rebuild on the original location because at the turn of the 20th century some guy bought the property and blasted it for the limestone underneath. Now it’s a parking lot that sits between the fort and the small red church in the distance. It’s one of those events that cause you to shake your head in disbelief. The first settlement in Kentucky; the settlement that opened the West to the White Man’s civilization and you blast it to bits. This in an area of the country where limestone is underfoot no matter where you walk. <keeps shaking head>

Troubling, too, is the state of the current fort. It’s in noticeable disrepair. Grass is tall, and weeds have made sufficient homes of the sidewalks. The fence is held up by 2×4 planks from the backside where tourists don’t go. This we learned from the Native American interpreter who shared, in great detail, the decay of the fort and lack of financial support for its upkeep. He couldn’t understand why money was given to the library instead. Both Stacy and I simply smiled at that comment, though we were in agreement otherwise. He was a nice young man of the Ojibwe tribe from Wisconsin spending his summer here.

The original pioneers that settled Fort Harrod are buried here. The cemetery, which was established in 1775 and used through the 1830’s, was never moved and somehow survived the nearby limestone blasting. The only person who isn’t buried here, ironically, is James Harrod, the man after whom the fort was named. Apparently he went out on one of his hunting excursions and simply never returned nor was he ever found. Also buried here is the last remaining inhabitant of the old fort, Ann McGinty. She was 84 when she died. Credited with bringing the first spinning wheel to Kentucky, McGinty ran the Ordinary of the fort. I didn’t know what that was until yesterday. Essentially, it’s where they put up travelers and fed them. Men on one side, women and children on the other. They were fed whatever foods were on hand at the time, and charged accordingly. The looms currently in use at the fort are 200 years old or better, though they are not McGinty’s looms.

Walking around yesterday I saw so much familiar to me. My grandmother Hamilton grew up in very similar conditions save for the buildings of rough wood, and a fort of course. They spun their wool, and weaved their own fabric and baskets. They were extremely self sufficient farmers, as most people were at the turn of the 20th century, and they had little use for store bought goods save for salt, sugar, and flour on occasion. It’s truly amazing how advanced we’ve become in such a short period of time, relatively speaking. And it’s this advancement that leaves me scratching my head about why the state would allow Old Fort Harrod to erode to such a degree. It is a state park after all, and it is a culturally significant place to both Native Americans and New Americans. It was from this outpost that the westward expansion grew. I hope that someone within the state ranks will soon recognize Old Fort Harrod’s worth and help with house keeping. Seems a pity to let it fall again.

“With our hearts filled with love, we count our blessings.” ~ David Bennett

“We can’t always choose the music life plays for us, but we can choose how...

“Stop making yourself afraid and nervous and anxious with your own thoughts.” ~ Unknown Photographer...

“Sometimes the bad things that happen in our lives put us directly on the path... 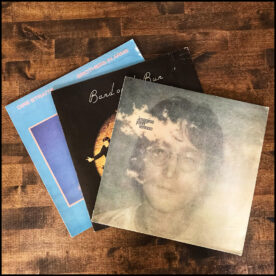 “By nature contains both love and hate. It contains ill will, rejection, resentment...