“Every time we walk with calm and ease, or we smile and release the tension in us, we are planting seeds that will strengthen our happiness. With each step, we plant a happy seed.” ~ Thich Nhat Hanh

Me and Lilly missed the NCAA men’s basketball tourney last year (thanks Covid), but this year is making up for it big time, what with all the upsets and only one Kentucky program in the tourney. And it’s not UK’s Wildcats. You wouldn’t believe how hard that’s been to explain to dad, repeatedly. It’s not U of L’s Cardinals. It’s not even WKU’s Hilltoppers. It’s tiny mountain university, Morehead State. Just about everybody I went to high school with who went to college went to MSU. Heck, I even earned a few credits from MSU during high school. It’s a 30 minute drive from West Liberty, and when WL was hit with the F3 in 2012, a lot of folks had to relocate. Morehead was waiting. When I told dad the Kentucky team that actually got to The Show, I thought he’d fall out of his chair laughing. But let me tell ya, MSU has a really good team and they have just as good a chance of winning as anyone in this tournament. I love that many of the powerhouse teams are out this year. It makes the tournament feel like it used to feel before College athletics became more like NBA farm clubs. I hope the MSU Eagles go as far as they can, and if it’s not them, I’ll be rooting for the mostest underdog there is (I’m looking at you UNT and Oral Roberts U.). Until then, GO EAGLES!

“Bring love wherever you go. Shine light wherever it’s dark. Leave blessings wherever you’ve been....

“No matter where you are in your life, you will always be able to come...

“This is the beginning of a new day. You have been given this day to...

“Earth is so thick with divine possibility that it is a wonder we can walk... 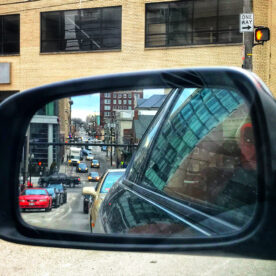