“Finish each day and be done with it. You have done what you could. No doubt some blunders and absurdities crept in; forget them as soon as you can. Tomorrow is a new day. You shall begin it serenely and with too high a spirit to be encumbered with your old nonsense.” ~ Ralph Waldo Emerson

Demolition Campus continues. They’re ramping up to destroy the Student Center which is attached to the old Alumni Gym. Earlier this week the doors were open as me and the lunch ladies were walking by. We stepped inside. I was under the impression that they’re not tearing down this old gym – built in 1924 and used by the UK Wildcats until 1950 – but they’re putting it behind fencing, so maybe I’m wrong. At one time it seated 2,800 people, quite the crowd back in the day. Now, 24,000+ seat Rupp Arena is too small for basketball fans. A small gym like this is endearing. If its walls could talk no doubt there’d be many a story to share. Here’s hoping they keep it, though the asbestos ceiling could use a facelift.

“Empty pockets never held anyone back. Only empty heads and empty hearts can do that.”...

“I can’t go back to yesterday because I was a different person then.” ~ Lewis... 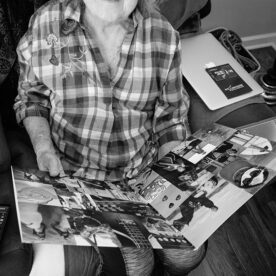 “Do not regret growing older. It’s a privilege denied to many.” ~ Unknown Cotton fields...

“I wanted a perfect ending. Now I’ve learned, the hard way, that some poems don’t...

“If you feel hurt, you have to recognize that are not hurting you because...