“I’m not creative,” she said, sadness rimming her eyes…
I asked, “But you love math?”
“Oh sure.” She nodded.
“Sweetness,” I said, “there’s nothing more imaginary than numbers. Folks like you use math to imagine the universe. You can’t say you’re not creative.”
“But the way ‘creative’ people work–”
I stopped her. “Is as unique and different as the person working.”
I tell her how my math-minded son filled sketch book after sketch book with plans for clay, even though his professor kept saying, “Just sit at the wheel and see what happens,” something he, like her, just wasn’t built to do. His ‘creativity’ soared in the planning, and his pottery rose from those plans, from his hands, in a way that was/is uniquely his.
“It’s okay,” I said, “to figure it out before you sit down at the wheel.”
Tears filled her eyes. “I thought I had to do it like other people.”
“No, baby girl,” I answered. “You only have to do it like you, whatever that means. But please, promise me one thing?”
Wide-eyed, she nodded slowly.
“Promise me you’ll never say ‘I’m not creative’ again.”
~ Mary Carroll-Hackett

Seeing yesterday’s photos of the gingkos along Catalpa, my friend Esther Edwards asked if the giant gingko tree near the King Library had turned yet. Like all of us who have ever worked in King, Esther knows how stunning the tree can be even in the worst fall-color years, and with this year’s colors vibrant beyond belief, she was right to be curious. As I was going into the office today, I ran into Crystal and learned we were both headed to the gingko, and both sorely disappointed we didn’t have anything more than our phones to capture its color. And my lord, what color! These photos are just as they came out of the phone, no editing necessary. Stunning. Plus, Crys and I had a chance to take pictures of each other taking pictures. It’s been a minute since we’ve done that. Always a pleasure to see my HRB. 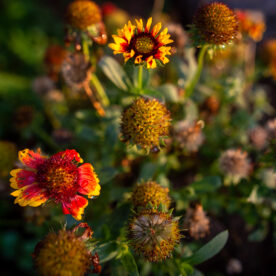 “It took me quite a long time to develop a voice, and now that I...

“Be true to yourself and surround yourself with positive, supportive people.” ~ Payal Kadakia Today...

“You don’t get to choose how you’re going to die. Or when. You can only...

“Be thankful for all the difficult people in your life, and learn from them. They...

“A man who limits his interests limits his life.” ~ Vincent Price     This...

“Handle every stressful situation like a dog. If you can’t eat or play with it,...