You first met Bryan Bartlett way back in the first month of the outhouse in 2012. He called me and Stacy The Fun Girls from Mount Pilot. Cracked me up. That’s the thing with most radio people: they’re hilarious and Bryan, being in radio, was right up there. A few months after that January dinner at Lygnah’s, I held my first Derby Party and all my radio peeps were there (except Josh who despises horse racing). I took a lot of pictures that day (unfortunately, I just had the APS camera and shooting JPG). In particular, I took a lot of pictures of Sandy Davis and Bryan Bartlett, standing side by side in the photo below as Bryan grins at me. It broke everyone’s heart when Sandy suddenly died in 2020. It breaks my heart now that Bryan joined her beyond the veil yesterday. The Fun Girls From Mount Pilot just got a little less funny. I’m going to miss him. 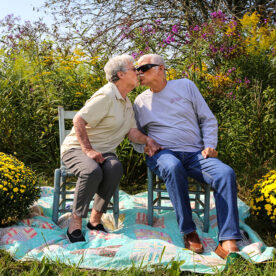 “Everything can be taken from a man or a woman but one thing: ...

“Do your little bit of good where you are. It’s those little bits fo good...

“Happiness isn’t getting everything you want. It’s enjoying all you have.” ~ Unknown The old...