“Life is about how you handle Plan B.” ~ Unknown

I awoke last Sunday to find a thick blanket of fog had settled over the Ohio River valley at Augusta. Naturally, out the door I went, heading straight for the water. My timing was perfect. The fog was thick and the water surprisingly still. It had been steadily rising since we’d arrived Friday afternoon, and yet, this morning, it was as still and mirror-like as if it was a pond. Admittedly, there wasn’t much to mirror in a blanket of fog except more fog, but it was peaceful beyond all imagining. Then, I saw something unusual peeking through. It grew larger, and though it was suspiciously quiet, I soon realized it was a very large barge headed upstream. It’s wake seemed to disrupt the entire world. The water broke its reflective stillness and the fog began to lift as if the barge itself was upending the fog as it moved upstream. It was a gorgeous moment really, and it set the tone for a beautiful week ahead.

“Even after all this time the sun never says to the earth, ‘You owe me.’...

“Forget not that the earth delights to feel your bare feet, and the winds long... 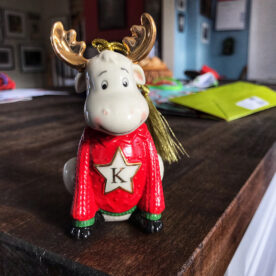 “Your mind is you instrument. Learn to be its master not its slave. ~ Unknown...

“Doing your best means never stop trying.” ~Unknown Today, I got a surprise visit from...

Leave a Reply to october 8, 2018 – the outhouse: where art goes Cancel reply