“Do not get upset with people or situations. Both are powerless without your reaction.”
~ Buddhist teaching

I rarely capture an image that I love, but this image is one of those rare exceptions. The path leading to the Adam Terry cemetery goes on up the mountain alongside the narrow hollow stream. At first I thought it was an old logging road since all the mountains in Eastern Kentucky, save for the Lilley Cornett Woods, have many times over been logged. And that may still be true, but I realized that the light leading the way through the trail led to an opening. Maps confirm that indeed it does. It opens to an enormous strip mine that has flattened the ridge above Ball Creek and the cemetery.

This part of the Eastern Kentucky landscape has been radically altered by strip mines and highways. When I was a little girl, almost 50 years ago now, the family made a trek to Ball Creek. It was still pristine back then. You could only drive the road up the creek so far before you had to drive in the creek, and then eventually, take a footpath to the head of the hollow where the Terry homestead used to sit. I think that part of the hollow is now Highway 80, filled in, the waterway changed accordingly and shown on the map as Big Branch. (Terry Branch of Ball Creek is closer to Soft Shell, a ways from the cemetery). Bad Ad owned the whole mountain I’m told. His oldest son, my grandfather, would have known all the details, and on this Father’s Day, I wish he was here to ask.

If I’m not mistaken, Adam and Lettie Terry’s graves were relocated when Highway 80 was built, hence their close proximity to it now. As much as I like the faster transportation through the mountains, I hate the thought of how much progress has changed family history. In fact, dad said time and again yesterday how he could have never imagined such a road through the mountains. I’m thankful for the easy travel, but I am especially grateful that I saw the mountains as God made them all those years ago (well, closer to the way God made them than they are now). They are part of me through and through. You can take the girl out of the mountains, but you can never take the mountains out of the girl. Not this girl anyway.

“We’ve got this gift of love, but love is like a precious plant. You can’t...

“If today gets difficult remember the smell of coffee, the way sunlight bounces off a... 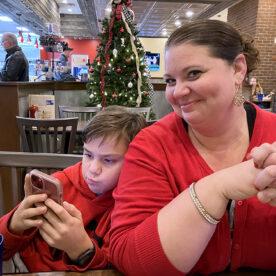 “Comparison is the theif of joy.” ~ Theodore Roosevelt I had a real treat tonight...

“Whatever you hear about me please believe it. I no longer have time to explain...