“Whatever you’re doing today, do it with the confidence of a four year old in a Batman t-shirt.” ~ Unknown

As promised, a couple of shots from last night. Above is Dr. Ron Penn with Karen Jones, and below is Bev Futrell and Cliff. Long-time followers of the outhouse first met Bev and Karen in 2016 when they gave their collective works to UK Archives, and again in 2018 at Kentucky Crafted. Cliff didn’t know until last night that we’ve known each other for neigh on 30 years now. Bev made my night when she told me how much fun she had sitting in with Stealin Horses playing harmonica at a gig where we shared the bill with them. I’d really like to do that again someday.

“The world always looks brighter behind a smile.” ~ Unknown I was in West Liberty...

“Find joy in everything you choose to do. Every job, relationship, home… it’s your responsibility... 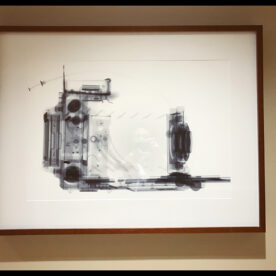 “Don’t treat people as bad as they are. Treat them as good as you are.”...

“Our task must be to free ourselves by widening our circle of compassion to embrace...